Keith Alexander: NSA Makes The Entire Internet Weaker To Protect You From Terrorists 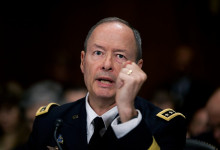 The NSA has never said much about the open secret that it collects and sometimes even pays for information about hackable flaws in commonly used software. But in a rare statement following his retirement last month, former NSA chief Keith Alexander acknowledged and defended that practice. In doing so, he admitted the deeply contradictory responsibilities of an agency tasked with defending Americans’ security and simultaneously hoarding bugs in software they use every day.

Story added 8. May 2014, content source with full text you can find at link above.