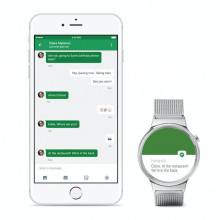 In announcing Android Wear for iOS on Monday, Google noted users can track steps, calories and other biometric readings in-app, but failed to confirm HealthKit compatibility. It has since been learned that Google chose not to integrate with Apple’s platform, instead opting for its own Google Fit service.

Representatives from Apple and Google told BuzzFeed News that Android Wear does not offer access to the HealthKit framework, meaning wearables running the operating system must use Google’s competing Google Fit system to log fitness and health measurements.

Story added 2. September 2015, content source with full text you can find at link above.