Google Fiber Sheds Workers As It Looks to a Wireless Future 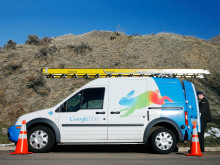 Google Fiber is getting a lot smaller. Alphabet is sending hundreds of employees at Access—the division that runs the high-speed internet service—to work at other parts of the company, an Access spokeswoman says. It’s not the end of Fiber, not exactly. But the slimming-down likely signals a future for Alphabet’s broadband ambitions that involves less fiber.

Read more: Google Fiber Sheds Workers As It Looks to a Wireless Future