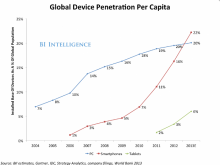 Sure, on the desktop, Windows still rules. According to Stat Counter’s’ April 2014 data, Windows has about a 90 percent market share. Out of an approximate base of 1.5 billion PCs, that’s about 1.36 billion Windows PCs. So, guess what’s the number two end-user operating system in the world?

I’ll give you a minute. <Cue the Jeopardy theme>