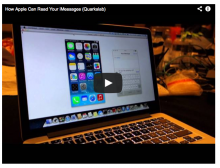 Even though the messages are encrypted end-to-end as Apple claims, according to QuarksLab researchers showed a packed room at Hack In The Box Kuala Lumpur, due to the lack of certificate pinning, “Apple can technically read your iMessages whenever they want.”